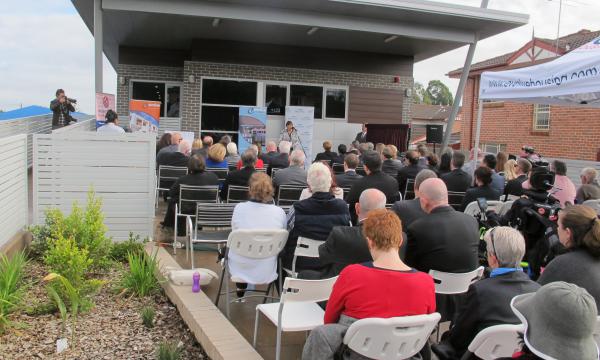 Merv Wright House, which was developed by Evolve Housing and is managed by disability service provider Northcott, was made possible by a $2 million investment by the Australian Government under the Supported Accommodation Innovation Fund (SAIF) and recurrent funding from the NSW Government.

Senator Payne joined state and federal MPs, tenants and their families, along with Mr Wright’s relatives, in declaring the facility open, saying it represented a new benchmark in supported accommodation.

“Merv Wright House is the first complex under the SAIF to be awarded Platinum Performance Level compliance, and having toured the facilities today, it is not hard to see why,” Senator Payne said.

“This development provides a range of high-tech fittings including adjustable kitchen benches, cupboards, along with a lift and hoists to assist wheelchair-bound tenants, all controlled by smart technology.

“The complex also features an affordable housing unit for aspiring homeowners who regularly lend a hand to their housemates, creating a real community feel.

“Neighbouring residents are also excited about this development – the fact that I was stopped in the street on my way to the ceremony by a neighbour who has watched every brick being laid, really says it all.”

Senator Payne also thanked Evolve and Northcott for their persistence and dedication in getting the development from the concept stage all the way through to development.

“These organisations have worked incredibly hard to get this facility off the ground and the Australian Government is proud to contribute to this project, which is a fitting tribute to Mr Wright and his tireless advocacy,” Senator Payne said.

“We will continue to work with Evolve and Northcott to help people with disabilities lead independent lives and to provide affordable housing options to those who aspire to own their own homes.”