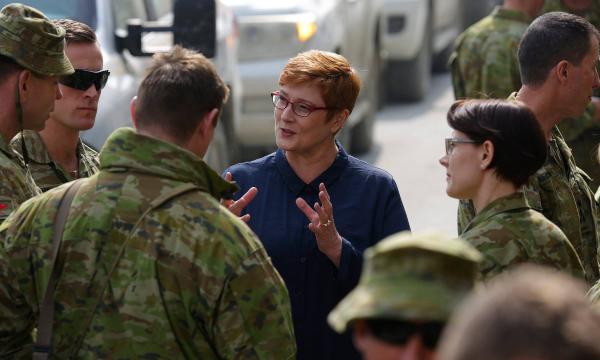 Rosemeadow Public School and No. 27 Squadron (RAAF) Association have received funding to remember the service and sacrifice of Australian defence force personnel under the Morrison Government’s Saluting Their Service Commemorative Grants Program.

Rosemeadow Public School has received $7,500 to create an outdoor learning space for students to appreciate and understand the work done by Australian military personnel during the Second World War.

No. 37 Squadron (RAAF) Association has received $4,169 to help fund a display of their local war history memorabilia at Richmond RSL Sub-Branch.

Liberal Senator for Western Sydney, Senator the Hon Marise Payne, said the funding was important to commemorate Australia’s international role in conflicts and congratulated the recipients in receiving the funding.

“Australia’s servicemen and women have had a strong role in international conflicts and peace-keeping operations,” Senator Payne said.

“These grants help support local communities remember the service and sacrifice of Australian military personnel and commemorate their role in shaping our nation.

“It is encouraging that Rosemeadow Public School and No. Squadron (RAAF) Association will establish a permanent place for our community to commemorate the actions and achievements in our service history.

“The staff and students of Rosemeadow Public School are excited to be a recipient of Saluting their Service funding,” Ms May said.

“The funding will enable the creation of an additional outdoor learning space that promotes a recognition, appreciation and deeper understanding of the service and sacrifices of Australian military personnel during the Second World War, particularly the bombing of Darwin and the Kokoda Track.”

“The No. 37 Squadron (RAAF) Association express our appreciation to the Federal Government and Department of Veterans Affairs Saluting Their Service Commemorative Grants Program for funding the purchase our display cabinet,” Mr Coyne said.

“The cabinet, to be located in the 37SQN Headquarters at RAAF Base, Richmond NSW, will enable a visual display of historical squadron memorabilia ranging from 1943 - 48 WWII operations through to current day warlike tasking in the Middle East Area of Operations (MEAO), where a 37SQN detachment has been deployed on permanent rotation for the past 17 years, since February 2003.

“The display will be vital to preserving the history of No. 37 Squadron’s operations past and into the future. The financial assistance is very much appreciated by our self-funded, not for profit Association.

Minister for Veterans’ Affairs Darren Chester said the projects and activities will play an important role in educating future generations about the service and sacrifice of Australian service men and women, especially as the 75th anniversary of the end of the Second World War on 15 August approaches.

“Australian service men and women in wars, conflicts and peacekeeping operations for over a century have played a role in shaping the nation. These commemorations, projects and activities ensure their story is captured for generations to come,” Mr Chester said.

“These grants will help community groups and organisations continue their important work in commemorating our service personnel and support those projects and activities which promote appreciation and understanding of the experiences of service.”

More than $2.2 million in funding was provided through this round of the Saluting Their Service commemorative grants program. The Federal Government’s election commitment saw an increase in the Community Grants cap from $4,000 to $10,000 and this batch of successful applicants will be the first to benefit from this.

The Department of Veterans’ Affairs (DVA) recognises the potential impact COVID-19 may have on recipients completing their projects, with social distancing and other public health measures in place across the country. DVA is committed to working with recipients who are affected on options to continue their projects. If you are a current grant recipient and COVID-19 has impacted your project, please contact your Funding Arrangement Manager to discuss options.

Applications for the next round of grants are open now. For more information on the Saluting Their Service Commemorative Grants Program visit the Community Grants Hub (www.communitygrants.gov.au).