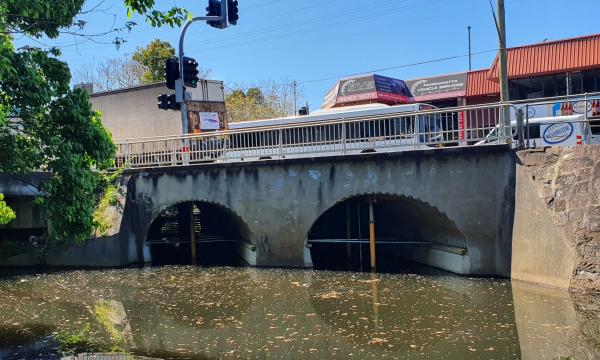 City of Parramatta Council will receive an important injection of funding to upgrade Hunts Creek Culverts under Round 5 of the Bridge Renewal Program.

$2 million will support council’s upgrade of the Hunts Creek Culverts to replace the existing culvert with a single span bridge.

Liberal Senator for Western Sydney, Senator the Hon Marise Payne, said this project would increase safety for commuters and pedestrians.

“This funding will upgrade Hunts Creek culverts to a single-span bridge and make it safer for commuters travelling between North Parramatta and North Rocks,” Senator Payne.

City of Parramatta Lord Mayor, Cr Bob Dwyer, was pleased with the funding under the Bridges Renewal Program.

“I want to thank the Federal Government for investing in such an important project in our burgeoning City,” City of Parramatta Lord Mayor Cr Bob Dwyer said.

“This $2 million will help Council replace two ageing culverts with a more robust bridge that will make it safer for heavy vehicles to travel on this key arterial road and improve water flow underneath North Rocks Road at Hunts Creek.

“We look forward to working closely with the Federal Government on this project and many others as Parramatta continues its incredible transformation as Sydney’s Central River City.”

Deputy Prime Minister and Minister for Infrastructure, Transport and Regional Development Michael McCormack said these latest rounds would support 350 projects across the nation.

“I am pleased to deliver more than $290 million in funding to more than 350 projects nationwide, which will upgrade and replace bridges which have been damaged or are deteriorating and improve key heavy vehicle infrastructure,” Mr McCormack said.

“With nearly 80 per cent of this funding going to local councils, the outcome of these rounds will support local workers, households and businesses through a difficult time and position the Australian economy for a strong recovery.

“Now more than ever the continued roll out of road infrastructure projects is important to support local jobs, underpin economic growth and ensure all Australians can reach their destinations sooner and safer and communities can rest assured that’s exactly what our Government is doing.”

For more information and a list of successful applicants, visit: