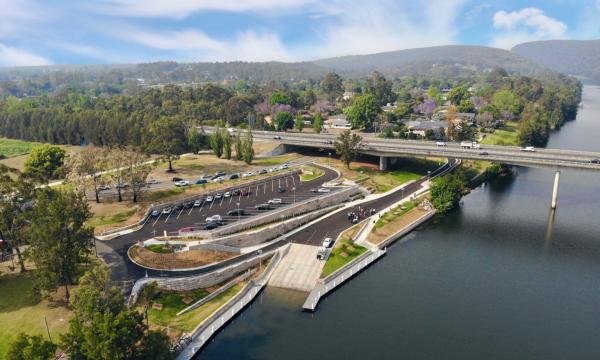 Locals will now be able to enjoy improved access to the Nepean River and its foreshore following the completion of works to Tench Reserve.

“Having helped announce this project in 2016, I am delighted that the stunning upgrade to Tench Reserve is now complete – I think it’s been well worth the wait,” Senator Payne said.

“When popular recreational places like Tench Reserve are renewed, it gives people the opportunity to get out and about more, and I think that’s a great outcome as it means locals will be able to further enjoy the iconic Nepean River.

"Investing in small-scale infrastructure projects at a grassroots level, whether it be at Tench Reserve or the Myrtle Road Playing Fields, for example, is only possible because of the Morrison Government’s strong economic management.”

The Federal Member for Lindsay has welcomed more access to the Nepean River and has congratulated all levels of government on collaborating to deliver this project.

“We want to encourage more healthy and active lifestyles in our community and this is just one of the ways we are doing this. The Tench Reserve upgrade will provide greater community access to our beautiful river so our families can enjoy it. We have everything from a three lane boat ramp to new boat and trailer parking bays, access roads, jetties along the foreshore, footpaths, fencing, stairs and lighting. This is all possible because at the heart of everything we do, we work with our community to fund these important local projects like Tench Reserve. During construction, we created local jobs for 17 people in our community and the long term benefit is that there will be greater river activity which will contribute to our ‘river economy’ particularly for the business and restaurant community in and around the Penrith CBD.” said Ms McIntosh.

Stuart Ayres, the Member for Penrith, said the Tench reserve project, which was funded by the Federal Government, NSW Government and Penrith City Council, involved a major upgrade to the existing boat ramp facility including the construction of a new three lane boat ramp, additional car and trailer parking as well as car only parking, jetties and access roads.

“This upgrade offers Penrith and visiting boaters and other watercraft users safer and easier access to get out and enjoy time with family and friends on our magnificent Nepean River.

Since 2015, under the Boating Now program, Transport for NSW has committed almost $965,000 to maritime infrastructure projects in the Penrith electorate.

Penrith City Mayor, Councillor Ross Fowler, said the new boat ramp and refurbished waterfront was a collaboration of all levels of government and a major win for the local community.

“This is a great result for Penrith and a great example of what can be delivered when Federal, State and Local government work together,” Cr Fowler said.

“This will be a tremendous asset for all of the fun loving and water loving people of Penrith.”