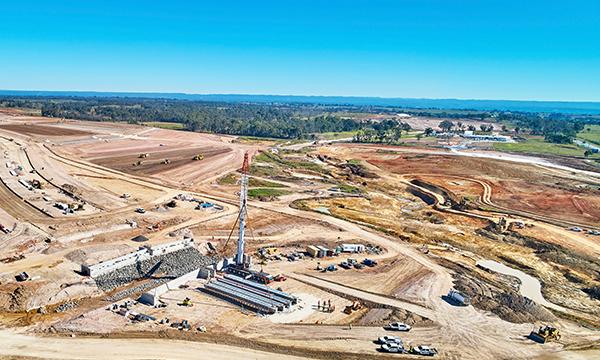 A commitment under the Western Sydney City Deal, the TAFE Skills Exchange will be established at the airport construction site, providing on-the-job training as the airport takes shape.

Up to 250 workers a year will be equipped with skills in areas including earthmoving, civil construction, safety and traffic control, with the potential to increase numbers as the construction project grows.

Minister for Population, Cities and Urban Infrastructure, Alan Tudge, said the announcement will benefit hundreds of people who are already working on the airport’s delivery.

“This incredible initiative will provide construction workers with a great opportunity to enhance their skills on the job,” Mr Tudge said.

“Western Sydney International is a unique project and one of the largest civil engineering projects underway in Australia.”

“it is important that it provides the chance for people to skill-up while on the job and learn from the delivery of this important project.”

“A TAFE NSW Skills Exchange is a key commitment of the Western Sydney City Deal, which we are getting on with delivering,” Mr Ayres said.

“The Skills Exchange will support the growth of the Aerotropolis and Western Parkland City by providing valuable skills and training to local workers who are part of the delivery of the transformative Western Sydney International Airport.”

Liberal Senator for Western Sydney, Senator the Hon Marise Payne, said the delivery of the airport involves multiple construction phases which requires a workforce which can adapt to the demands of the mammoth project.

“The skills exchange program will help ensure that skills keep pace beyond the earthworks phase, which will include the construction of the 3.7 kilometre runway and an on-airport business park,” Senator Payne said.

“The airport is our region’s very own Snowy Hydro and this initiative is yet another important step towards supporting our local western Sydney workforce.

“This skills exchange provides these learning workers employed in the delivery of Western Sydney’s airport an important opportunity to diversify their skills and develop their careers,” Dr Lee said.

“Initially, this facility will see up to 250 workers a year equipped with skills in areas including earthmoving, civil construction, safety and traffic control, with the potential to increase numbers as the construction project grows.”

The Federal Member for Lindsay Melissa McIntosh said the announcement was a further boost for Western Sydney.

“The Morrison Government promised a strong local economy and jobs growth and this exchange will deliver on those promises,” Mrs McIntosh said.

“There is a lot to be excited about in Western Sydney right now.”

Construction of Western Sydney International commenced on 24 September 2018 and the airport is on track to open in 2026.

@MarisePayne
On #WorldHealthDay, heartfelt thanks to #nurses, #midwives and all our dedicated health workers on the #COVID19 frontline. #stayhome @NBMLHDpic.twitter.com/jdp3CxDHWh
31 May 2020 2:25 pm
@MarisePayne
Whether you’re marking #AnzacDay2020 from your #drivewayatdawn or you are overseas remembering our veterans and servicemen & women, today is a day for all Australians to unite in saying thank you to those who made the ultimate sacrifice. #LestWeForgetpic.twitter.com/JG0NTqXlfh
31 May 2020 2:25 pm