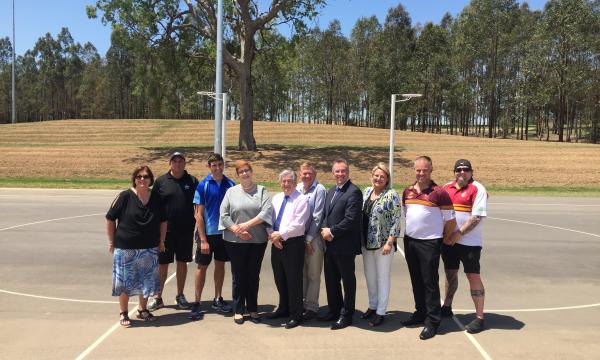 Liberal Senator for Western Sydney, Senator the Hon Marise Payne, today announced the successful completion of upgrades to key sporting facilities in Lindsay following over $1 million in funding being provided for the projects by the Liberal-National Government.

The funding was delivered under the Australian Government’s Community Development Grant Program, a landmark scheme designed to support the upgrading of key infrastructure projects to promote economic growth and enhance liveability.

Funding for the four separate projects delivered the following upgrades:

Liberal Senator for Western Sydney, Senator the Hon Marise Payne, who officially  marked the completion of the projects at Jamison Park, said the Liberal-National Government had made a significant investment in grassroots sport in Penrith.

“As the Liberal Senator for Western Sydney, but also as a local resident, I know that the Penrith region is home to some of the most passionate and talented sports people in New South Wales,” Senator Payne said.

“The completion of these upgrades means that local sporting teams and athletes have the modern facilities they need to get active, keep healthy and have fun.

“The successful delivery of this funding is further proof that the Liberal-National government’s plan for a stronger economy is working, and has help bring the Penrith community together in support of grassroots sport.”

Deputy Prime Minister and Minister for Infrastructure, Transport and Regional Development Michael McCormack said the investment in sports facilities will provide a range of new opportunities for schools and community groups around Penrith.

“A new 20-metre extension to the rowing dock at the Weir Reserve on the banks of the Nepean River allows more and larger boats to access the dock, providing greater access for use by local rowing groups and schools.”

“Council is committed to making Penrith a healthy and safe city by providing residents with quality sporting and recreation facilities like Ched Towns and Patterson Oval and Jamison Park and the Weir Reserve rowing dock,” Cr Fowler said.

“The upgrades to each will enhance usage bringing significant economic benefits to the region through increased sporting events, elite competitions and community activities that will increase visitation to Penrith and Western Sydney.”

“The new courts and lighting has enabled Penrith Netball to expand our competitions, particularly with State wide competitions, which we will be involved again in 2019 and hosting another Junior State championship,” Ms Gillett said.

“We will double the number of players, since we last hosted in 2017, with the additional courts. The extra court lighting has enabled more training courts for weeknights plus a larger night competition in 2018, an increase of 10 teams or about 100 players over last year.

Captain of the Nepean Rowing Club, Daniel Waddell, said the upgrades to the Weir Reserve rowing docks had enhanced the Club’s use of the facility.

“Nepean Rowing Club is very pleased with the recent extension of the pontoon,” Mr Waddell said.

“This will be most beneficial for events held on the river, not only for rowing, but for all water sports that utilise the river.

“Everyday training usage has already benefited with the increase in space allowing rowers in particular to enter and exit the water far quicker than they did before the extension.”

“On a behalf of Glenmore Park Brumbies, we would like to thank the federal government and Penrith City Council for helping our club receive much needed upgrades to our canteen facilities and playing field lighting,” Mr Wildman said.

“Our old canteen was over 20 years old and was no longer able to meet our needs. Now that it has been upgraded, it will help us make more money to keep our club running for years to come. And make for a much cleaner and friendlier environment for our volunteers to work out of.

“The lighting has made a massive difference for our 43 teams that use the fields. Compared to the old lights, the new ones are much brighter and turn night into day making it a safer and more enjoyable experience at training for our 700+ players and coaching staff.”

“We will continue to work with our local members to help improve our facilities even more in the near future. Without the support and funding from government bodies, clubs like ours simply couldn’t operate.”

Grant Kean, President of the Penrith Junior Cricket Association, thanked the Liberal-National Government for the funding and said the upgrades to Patterson Oval had help increase the capacity of cricket clubs to field teams in inclement weather.

“The ongoing investment from government continues to ensure our local cricketers have access to the infrastructure that enables them to play the sport they love during summer,” Mr Kean said.

“Upgrades to Patterson Oval again provides an example of this by improving the playing surface, particularly in adverse weather conditions, and giving us availability to a ground that may not have been possible previously.”