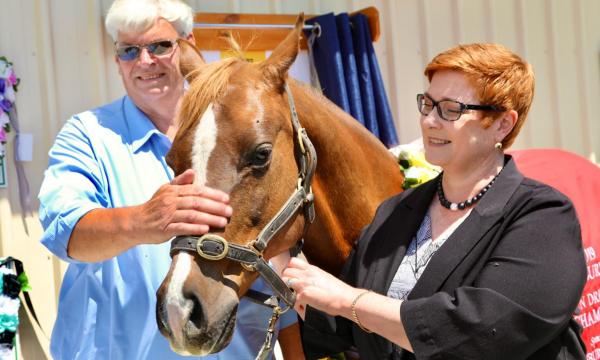 The Hawkesbury equestrian community will benefit from a major expansion to the Hawkesbury Showgrounds with new stables to support more riders and regional events.

Federal Minister for Youth and Sport, Senator the Hon Richard Colbeck, said the upgraded facilities will cater to a range of equestrian sports.

“The Hawkesbury is one of the biggest recreational equestrian regions in NSW and these upgrades will ensure the showground remains a premier and affordable venue for training and competition.

“The Hawkesbury Showground is home to the beloved Hawkesbury Show, which holds pride of place for many locals and is a focal point of the community,” Senator Payne said.

“This funding means more riders can participate, which in turn will encourage more locals into the sport.

“The new facilities are a great investment in the future of the Hawkesbury District Agricultural Association and Hawkesbury Showground, and I look forward to seeing the facilities well-used by all riders.”

“The availability of these additional facilities is extremely exciting for both the Association and the equestrian users of the Showground. Their completion significantly enhances the quality of equestrian sports infrastructure available at the Showground,” he said.

“In addition to the benefits to the equestrian community, the project has engaged local businesses in the construction work.”

More than 680 projects are being delivered through the Australian Government’s $100 million Move it AUS - Community Sport Infrastructure grants program, enhancing sporting facilities across the country.

@MarisePayne
On #WorldHealthDay, heartfelt thanks to #nurses, #midwives and all our dedicated health workers on the #COVID19 frontline. #stayhome @NBMLHDpic.twitter.com/jdp3CxDHWh
31 May 2020 12:37 pm
@MarisePayne
Whether you’re marking #AnzacDay2020 from your #drivewayatdawn or you are overseas remembering our veterans and servicemen & women, today is a day for all Australians to unite in saying thank you to those who made the ultimate sacrifice. #LestWeForgetpic.twitter.com/JG0NTqXlfh
31 May 2020 12:37 pm