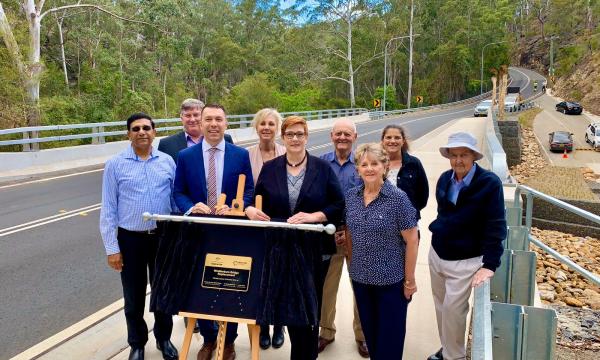 Motorists will no longer face significant delays while travelling along the Wedderburn Causeway due to heavy flooding following the completion of a new bridge.

It is a welcome upgrade for local residents concerned over the safety and accessibility of the bridge during heavy rains and flooding.

The project, which has been jointly funded by the Morrison Government and Campbelltown City Council, includes a new, higher two-lane bridge.

Liberal Senator for Western Sydney, Senator the Hon Marise Payne, said she was delighted that the bridge will help motorists travel and return home sooner and safer.

“When I visited the site in December 2018 works were in progress, but today I am pleased to see the bridge complete and providing safe and reliable roads for the local community,” Senator Payne said.

“This is a prime example of the Morrison Government investing in grassroots infrastructure projects in western Sydney, which is vital to the successful growth of our region.

“This higher concrete bridge will ensure the crossing can be accessed in wet weather. It will also reduce travel times for cars and freight vehicles.”

Mayor of Campbelltown George Brticevic said he was delighted to see the completion of the important project and that resident and visitors to Wedderburn now had a safer and more visually appealing route into the leafy suburb.

“This bridge is the only way in or out of Wedderburn so this project will ensure residents are able to access the area no matter what the weather conditions are,” Cr Brticevic said.

“The new signage also provides visitors with a visual representation of the area, which is an important habitat for many native plant and animal species.”

The new sign features a gabion mattress wall behind a large weathered steel welcome sign, which includes a koala motif.

Offcuts from the pylons of the original timber bridge located at the site have also been incorporated into the design. Artworks have been carved into the timber and steel animal sculptures depicting a lyrebird, owl and frog have been placed atop some of the timber pylons.

The surrounding site was landscaped and planted with native trees, shrubs and groundcovers.

On the other side of the bridge more timber pylons were erected with artworks carved into them.