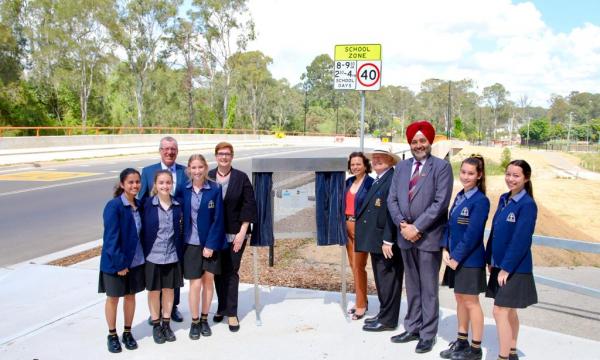 The new Rouse Road Bridge in Rouse Hill has been officially opened at a ceremony today, marking the end of a long campaign to upgrade the road by the community and nearby Rouse Hill Anglican College.

Deputy Prime Minister and Minister for Infrastructure, Transport and Regional Development Michael McCormack said the project had been jointly-funded through the Federal Liberal and Nationals Government’s Bridges Renewal Program.

“The new Rouse Road Bridge will make the area safer and save motorists time during their daily commute. It stands as a great example of how the Bridges Renewal Program helps local councils to better connect their communities,” Mr McCormack said.

Liberal Senator for western Sydney, Senator the Hon Marise Payne, said the new bridge will replace the existing flood-prone causeway at Rouse Road, improving the safety of the local community.

“The Rouse Road Bridge will bring welcome relief to the local area, particularly the Rouse Hill Anglican College, and provide safe travel around the causeway during heavy rain.

“I am pleased to see the Liberal Nationals Government engage with grassroots communities and deliver safer roads to local commuters,” Senator Payne said.

Blacktown City Council Mayor Tony Bleasdale said the opening of the Rouse Rd Bridge solved a number of significant problems and that the bridge was a major access point for the Tallawong Metro station and Rouse Hill Anglican College.

“This area is experiencing rapid growth and the old causeway was an enormous traffic bottleneck and a serious safety concern for pedestrians and motorists alike during times of heavy rain,” Cr Bleasdale said.

“Blacktown City Council had the bridge planned for some time, but needed to wait for available funding. The Australian Government grant enabled the work to be fast-tracked.”

Rouse Hill Anglican College Principal, Mr Peter Fowler, said the project completion was worth the wait and will ease travel throughout the community.

“The completion of the Rouse Road Bridge has had a transformational impact on the operation of nearby Rouse Hill Anglican College. Our community has been waiting a long time for this bridge.

“Prior to completion of the bridge, students and College families experienced many significant interruptions to access due to the regularly flooded causeway. We are now able to enjoy reliable and safer access for our students to the College.