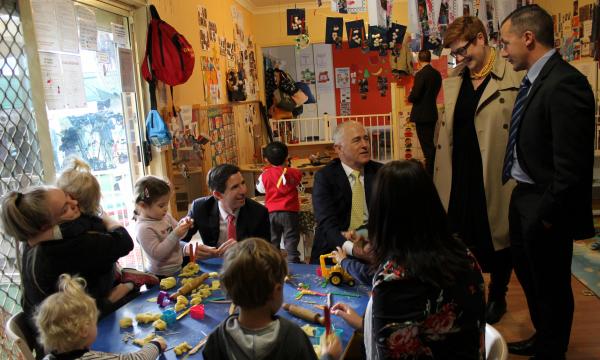 “In fact in Lindsay more than 8,400 families are set to benefit from the reforms.

“Many families in Lindsay will be hundreds if not thousands of dollars a year better off under the Turnbull Government’s reforms,” Senator Payne said.

“Thank you to the owners and managing directors of Mud Puddles Cottage, Kirstie and Mark Jackson, who are coincidentally celebrating one year of ownership today, and the lovely children who attend the centre for spending their morning with us.”

Mrs Jackson was impressed with the new reforms.

“We believe the new child care package is beneficial to our working families,” Mrs Jackson said.

Minister Birmingham said the reforms would put more money back in the pockets of hardworking Australian families.

“The Turnbull Government’s reforms will inject an extra $2.5 billion into the system and are set to benefit almost one million families nation-wide,” Minister Birmingham said.

“We’re also introducing an activity test to ensure subsidies are targeted to those who depend on child care in order to work, train, study or volunteer, or who are looking for work or want to work additional hours.

“This better reflects the needs of modern Australian families and their desire to base their child care around their work, rather than making their work suit their child care. It’s estimated around 230,000 families will increase their workforce participation,” Minister Birmingham said.

“These changes are key to the Turnbull Government’s plan for a stronger economy that helps guarantee the essential services that so many families rely on, such as child care and early learning support.

“Our reforms stand in stark contrast to the Labor Party who voted against more child care support for families and who have refused to outline any plans for Australia’s early childhood education and care system,” Minister Birmingham said.

If families haven’t made the switch yet, they should visit www.education.gov.au/childcare or update their details on myGov so they can start to benefit from the new system.  Back payments of the new Child Care Subsidy for up to three months are available for families who are yet to make the switch.