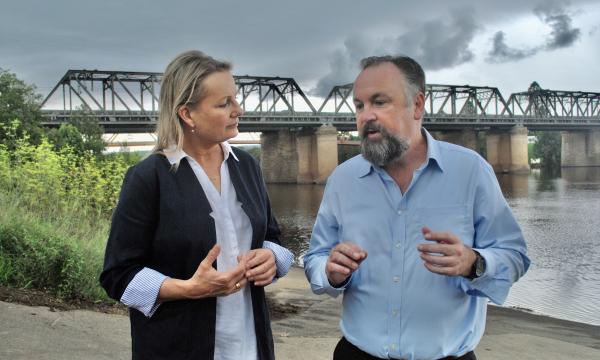 Three key projects delivering improved health and water quality to the Hawkesbury and Nepean Rivers have been approved under the Morrison Government’s $100 million Environment Restoration Fund.

Minister for the Environment the Hon Sussan Ley, Member for Lindsay Melissa McIntosh and Senator for Western Sydney, the Hon Marise Payne visited the banks of the Nepean River today to finalise the $511,000 investment in healthier waterways and improved native vegetation.

Projects include the upgrade of weed management infrastructure such as weed booms, weed removal, and the revegetation of native riverbanks working with indigenous rangers.

Member for Lindsay, Melissa McIntosh, said that the funding showed the Morrison Government was listening to community concerns.

“I’m proud that this project is ready to begin. Last year, I stood by our river to announce this funding and it has been a passion of mine and our community,” Ms McIntosh said.

“Everyday groups such as the Nepean Rowing Club and local families use our river for their health, enjoyment and well-being. I am delighted to see their efforts supported. Our local councils alongside Muru Mittigar will be on the ground delivering this important infrastructure and I look forward to seeing the project get underway and deliver real results”

Liberal Senator for Western Sydney, Senator the Hon Marise Payne, said the funding package was particularly timely given the recent flooding along the banks of the Hawkesbury and Nepean rivers.

“This funding will help rejuvenate and protect the Nepean and Hawksebury rivers, which are absolutely iconic Western Sydney Waterways,” Senator Payne said.

“Delivering this funding underscores the Morrison Government’s commitment to practical environmental action at a grassroots level.”

Minister for the Environment the Hon Sussan Ley said that local environmental actions such as these play a key role in highlighting the importance of protecting landscapes and waterways.

“The environment is not something that is ‘out there’, it is all around us and our local river systems, along with the vegetation and wildlife they support, are a major focus.”

@MarisePayne
A first group of Australians will soon return from Peru after constructive work between the Govt and travel company, #Chimu. Our Ambassador @EmbAusLima is now working with to secure a slot for departure from Lima as soon as practicable. #covid19australiapic.twitter.com/gEOqu4mZ4d
2 April 2020 2:21 am
@MarisePayne
Statement welcoming the start of the MH17 trials in the Netherlands. Australia is determined to continue in our efforts to seek justice for the deaths of 38 Australian citizens and residents in the downing of MH17.pic.twitter.com/FWxtsp9eDL
2 April 2020 2:21 am