Construction starts on Campbelltown Centre of Sport and Health Excellence 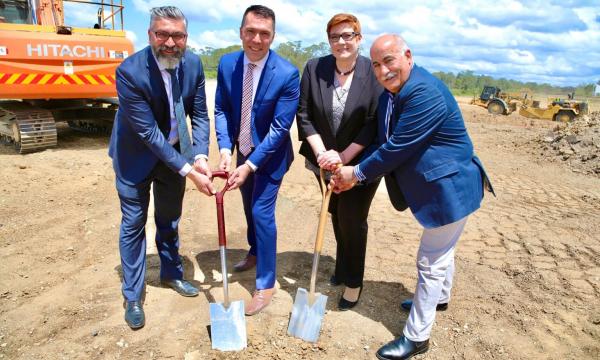 The first sod was turned on the Campbelltown Centre of Sport and Health Excellence today, marking the official start of construction on the important project.

The $25.18 million facility will be a regional hub for elite sports teams and athletes, and will also provide development pathways for grassroots sporting clubs and players.

Liberal Senator for Western Sydney, Senator the Hon Marise Payne, said the Centre would boost the capacity of South-Western Sydney to develop sporting talent from the grassroots through to the elite sporting level.

“Having overseen this project from the concept stage, I am delighted that new ground, literally, has been broken,” Senator Payne said.

“We know that fostering sports talent requires world-class facilities, and the centre will deliver this in spades through the inclusion of high performance training spaces, active recovery areas and dedicated sports science and analysis amenities.”

Mayor George Brticevic said the centre of excellence would provide elite pathways for young athletes in the region.

“This facility will be a central sports hub for the entire region, providing our young athletes with the opportunities and facilities to reach their potential and represent us on the national and international stage,” he said.

“I can’t wait to return here and open the doors to a centre of excellence which will take the sporting prowess of our already sports-mad community to another level.”

Senator Payne and Mayor George Brticevic also officially announced that the Macarthur FC Bulls will be based as the Centre.

“This is a major win for the region – it’s a vote of confidence not only in the Centre, but in the sporting potential of South-Western Sydney,” Senator Payne said.

Mayor George Brticevic said the Centre would be a terrific ‘home base’ for the A-League team,

“Now that we have a truly elite team anchored with Campbelltown, it makes sense that the Macarthur FC are our first tenants for the new facility,” Cr Brticevic said.

Construction of the facility is expected to be complete by June 2021 and provide 141 jobs during construction and 50 jobs when it is completed.

The facility is located opposite the Western Sydney University’s Campbelltown Campus.