Boating gets better at Tench Reserve 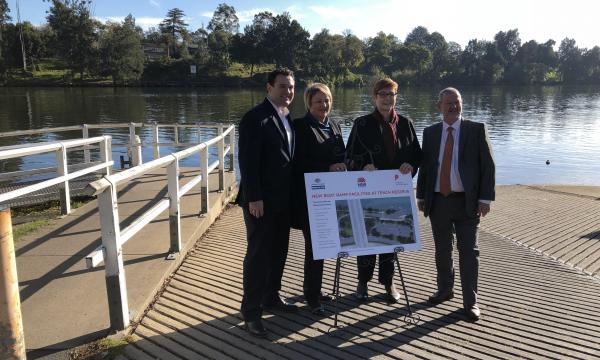 Work has begun on new upgrades to Tench Reserve which will benefit the local community.

“Investing in local, grassroots infrastructure is a key priority of the Turnbull Government and the upgrades we have announced will help ensure that Tench Reserve is accessible for the many sporting and community groups which use the docking and parking facilities,” Senator Payne said.

“As the Senator for Western Sydney and a local member of our community, I know that these upgrades will enhance the amenity of the iconic Nepean River and make Tench Reserve a landmark destination for locals and visitors alike.”

Minister for Regional Development, Territories and Local Government Dr John McVeigh said the upgrades would provide safer and better access to the waterways.

“The upgrades will provide a safer and more accessible meeting place for the local community,” Dr McVeigh said.

“This upgrade will ensure local and visiting boaters have safer and easier access to our beautiful Nepean River,” Mr Ayres said.

Mayor of Penrith City Council John Thain said the works are an important element of Council’s Our River Masterplan, which is being jointly funded by the Australian Government and NSW Government.

“Construction of the new facilities has commenced in a new location, south of the existing boat ramp, with the contract being awarded to Land and Marine OE Pty Ltd, who have a demonstrated record in delivering similar projects for other councils,” Cr Thain said.

“Council is committed to working with the Australian and New South Wales governments, especially through the Western Sydney City Deal and its $150 million Liveability Program, to ensure all opportunities for enhancing the river precinct are maximised; from Tench Reserve to Regatta Park.”

The Tench Reserve upgrades are jointly funded with the Coalition Government investing $5 million, the NSW Government $800,000 and Penrith City Council up to $3.3 million.

The existing boat ramp will remain open during the upgrade works which will be completed by mid-2019.