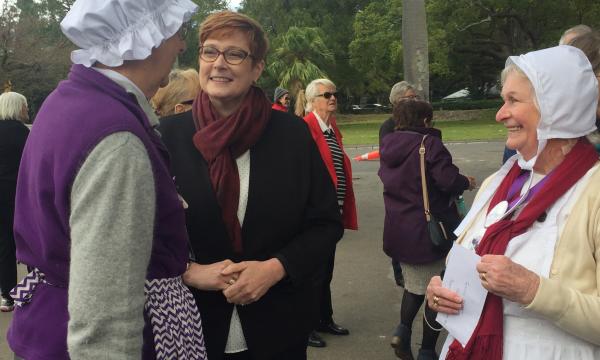 Senator Payne, who represented Minister for the Environment and Energy Josh Frydenberg at the event, said the first stone had been laid in 1818 by Governor Lachlan Macquarie.

“With that act, he established a foundation not just for the buildings that were to follow, but for a place and a system that shaped Australia’s convict and social welfare history,” Senator Payne said.

“Last year, the Turnbull Government added the Parramatta Female Factory and Institutions Precinct to our most prestigious list of heritage sites – the National Heritage List.

“On that occasion, we honoured the tens of thousands of women and children who were institutionalised here. We do so again today, here in the grounds of Cumberland Hospital in north Parramatta.

Parramatta Female Factory was Australia’s earliest purpose-built female convict site and the first destination for convict women sent to colonial Sydney. It was a place of work and punishment, a marriage bureau, a labour hire depot, and a shelter for ill, pregnant or unemployed women.

“The buildings and archaeological artefacts of this precinct offer us rare insight into the lives of these women, whose experiences and perspectives are largely missing from historical records,” Senator Payne said.

By the mid-1800s, the convict era had ended, but the practice of institutionalisation had not. The precinct went on to house a Roman Catholic Orphan School and the Parramatta Girls Industrial School, a home for disadvantaged or ‘wayward’ girls. Their stories, too, echo within the perimeter walls, the isolation rooms and long, narrow attic dormitory spaces that survive to this day in the precinct.

“I thank the Parramatta Female Factory Friends for organising this event and for commemorating Governor Macquarie’s legacy, the Factory and everyone associated with this nationally-significant precinct,” Senator Payne said.