Airport is a means - not the end for Western Sydney 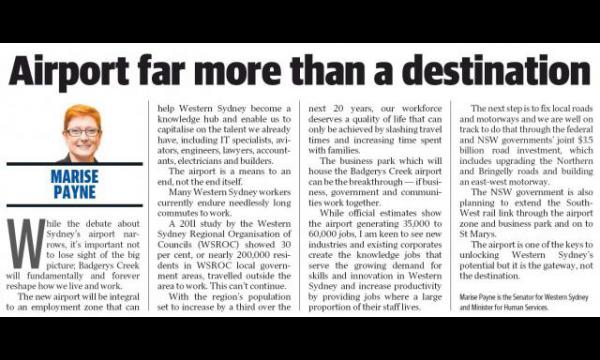 As the discussion progresses about a second Airport in Western Sydney, it is an opportune time to broaden our focus.

While debate continues about new aircraft, runway alignments and the local environment, not to mention property values – something that could be the real game-changer is the potential of an airport to fundamentally reshape how and where we work in Western Sydney.

The new airport will form a vital part of an employment zone that can finally help Western Sydney realise its potential as a knowledge hub, where skilled professionals can live, work and play in their own back yard.

The airport will help us get the most out of the abundance of human capital we already have. In short, it is a means to an end, not the end itself.

Currently, far too many Western Sydney residents are forced to endure crowded trains and congested motorways on their long commutes to work. A 2011 study by the Western Sydney Regional Organisation of Councils (WSROC) showed that 30 per cent – or nearly 200,000 residents in WSROC local government areas, travelled outside the area to work.

Western Sydney residents face an average commuting time that is 35 per cent to 50 per cent longer than the Sydney average, according to the Department of Transport and Infrastructure’s Joint Study on Aviation Capacity for the Sydney Region.

This is unsustainable for both our infrastructure and our families.

With the region’s population set to increase from two million to three million in the next 20 years, western Sydney’s current and future IT specialists, accountants, lawyers, engineers, electricians and builders, deserve a quality of life that can only be achieved by drastically reducing their travel times and increasing their time with family, friends, community and sporting clubs.

The business park which will house the Badgerys Creek airport can help us achieve this, providing business, government and the community work together, overlook political differences and focus on the potential of this venture in its entirety. The city hubs of Penrith, Blacktown and Campbelltown are also ideally placed to encourage large corporates to their business areas.

While official estimates show the airport itself creating between 35,000 to 60,000 jobs, I am also keen to see the new industries and corporates locate to both serve the growing demand in the Broader Western Sydney Employment Area, and to take advantage of the vast highly skilled employee resource already there.

I look forward to a future where medical graduates from Western Sydney can put their skills to work in medical research here, helping find cures for diseases like cancer, or perhaps inventing the next Cochlear implant.

I look forward to a future where heavy freight can be handled and distributed from Western Sydney using cutting-edge technology developed right here in Western Sydney.

And I look forward to a future where the electrician who is usually stuck on the M4 Motorway in the afternoon, gets home in time to take the kids to football training.

It makes business and human resource sense to locate businesses where the employment base lives.

Our higher education providers are also eagerly awaiting their chance to provide the lifeblood to the beating heart of the Western Sydney employment zone, in the form of work-ready graduates.

Professor Barney Glover, Vice-Chancellor of the University of Western Sydney (UWS), which has campuses in Penrith, Campbelltown, Bankstown and Parramatta, says his university is gearing up to produce even more skilled graduates to supply the workers of the future, particularly in the technology fields.

“UWS is well-placed to build on the productivity and economic opportunities arising from the airport and associated infrastructure commitments,” Prof Glover said.

“Our growth strategy is centred on up-scaling our delivery of the highest quality, affordable degree programs, with the high-tech focus critical to realising Western Sydney's potential."

The next step is to unblock the clogged arteries of Western Sydney in the form of local roads and motorways and we are well on track to do that through the Federal and NSW governments’ joint $3.5 billion road infrastructure package.

This investment will begin by upgrading the Northern and Bringelly Roads, which are crucial connecting roads in Western Sydney and continue with the construction of a new east-west motorway between the M7 and the Northern Road.

The NSW Government is also in the early stages of planning the extension of the South-West rail link from Leppington and Edmondson Park, through the Badgerys Creek airport and business park through to St Marys.

We have all the ingredients we need to make Western Sydney the knowledge hub of NSW and an economy that is envied the world over. The airport is one of the keys to unlocking the vast potential we possess in Western Sydney but it is the gateway, not the destination.