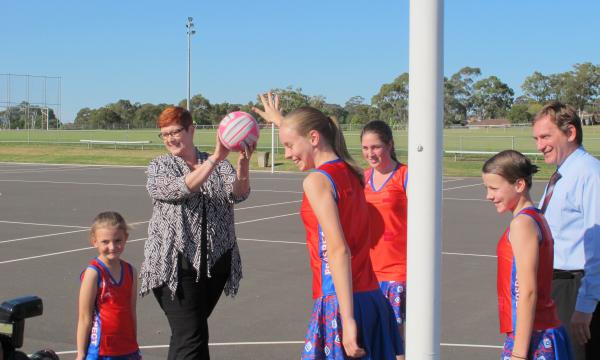 The Australian Government contributed $100,000 towards the project under the Community Development Grants Programme administered by Assistant Minister for Infastructure and Regional Development, the Hon. Jamie Briggs MP, with the Council providing $42,000.

The joint investment enabled the Council to upgrade and resurface the courts, allowing them to be used for multiple sports including netball, soccer, little athletics, and tennis.

Senator Payne said the park is an important community asset and the upgrade would open it up to many more local residents in a fast-growing area.

“This upgrade is great news for not only local netball teams but also for members of many other sporting teams in this area,” Senator Payne said.

“The multi-purpose courts at William Lawson Park are just the type of facilities that are needed to cater for the needs of the growing population here in Prospect and Blacktown more broadly.

“I’m delighted that the Australian Government has been able to contribute towards productive community infrastructure in Western Sydney.

“I also congratulate the Council on completing this work to such a high standard.”

Mayor of Blacktown City, Cr Stephen Bali, said the new facilities would provide an outlet for community members of all ages and levels of sporting ability.

“The upgraded courts are a great boost for players in competitive teams and those just having a social game with friends,” Cr Bali said.

“The revamped facilities also increase safety for players and improve the general amenity of the area.

“I’d like to thank Senator Payne and the Australian Government for contributing to this vital community project.”