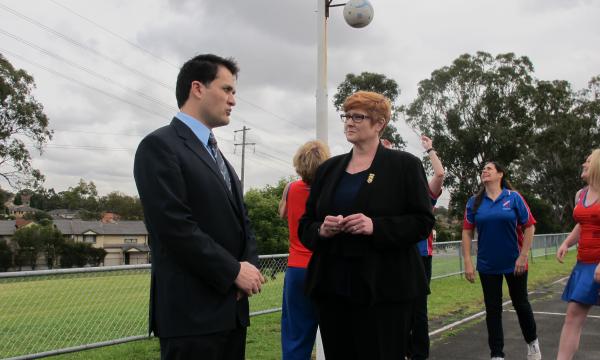 The Australian Government is delivering on its election commitments to the electorate of Greenway through the Community Development Grants Programme.

The Assistant Minister for Infrastructure and Regional Development, the Hon. Jamie Briggs MP and the Senator for New South Wales the Hon. Marise Payne today announced that the Australian Government had delivered funding for the upgrade of the Netball Courts at William Lawson Park, Prospect.

Visiting the courts today, Senator Payne said the $100,000 investment will upgrade and resurface the netball courts at William Lawson Park, providing a safer training ground for local netballers and other community members.

“Blacktown is a fast-growing area and it is important that we invest in community sports facilities to cater for competitive players and those looking to enjoy time with friends,” Senator Payne said.

Mr Briggs said this funding was another example of the Australian Government’s commitment to providing long term improvements in productive community infrastructure for communities across Australia.

“We are getting on with the job of providing $314.2 million toward almost 300 community projects across Australia,” Mr Briggs said.

Blacktown City Councillor Karlo Siljeg, Chair of Council’s Sport and Recreation Advisory Committee, welcomed the investment, saying the facilities would help enhance the region’s reputation as a sporting hub for young people and be a source of pride for the local community.

“The upgraded netball courts will greatly benefit players of all ages and abilities, increase safety and improve the overall appeal of the area,” Cr Siljeg said.